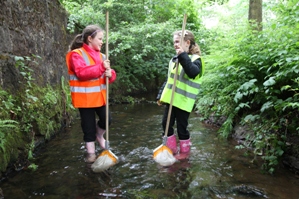 Kids and the Kelvin 2011 has finished. 357 pupils from 14 schools in the Kelvin Valley LEADER area took part. We learnt how to look after fish in a hatchery and raised trout eggs in the classroom. We released the fish in our local burn. We revisited the river to watch electrofishing in action and see our local fish species up-close. We took kick samples from our burn and took the samples back to the classroom. We identified the many river invertebrates (wee beasties!) living in our river and learnt how invertebrates are linked to the health of the river ecosystem. We also learnt how to use microscopes. And we made caddis fly larvae out of pipe cleaners! 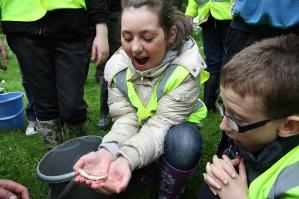 As a direct result of the project, pupils from Chapelgreen and Twechar Primary schools were the first people in over a hundred years to see salmon in the Queenzie Burn and the Board Burn! Other notable highlights were a fly-casting lesson from the  Campsie Angling Association and finding a very big eel in the Ebroch burn! 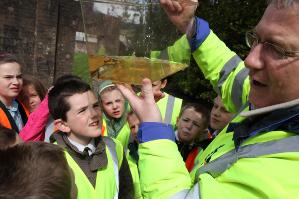 My favourite thing was the electrofishing, kick sampling, identifying the fish and releasing the trout because I got to see everything in the burn. (Pupil from Chapelgreen Primary). 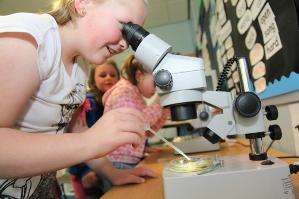 I liked releasing the fish best because I felt really happy that we were improving the river by letting the fish go and we were doing good for the environment and I am so glad. (Pupil from Holycross Primary)

I liked identifying the fish we caught and going down to the river and watching Lesley and David catch the fish with the electric equipment and I also liked kicksampling. I loved making the mayfly that was my favourite. my favourite was identifying the invertebrates because it was cool and a lot of thing I saw I didn’t know were alive. (Pupil from St Flannan’s Primary) 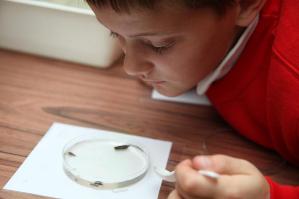