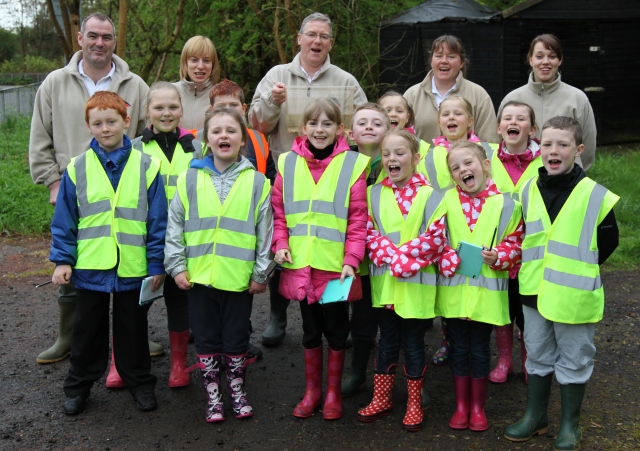 Primary school pupils at Chapelgreen Primary found the first confirmed salmon in the Queenzie Burn for over 100 hundred years. Scientists from the Clyde River Foundation were delighted when they scooped out a juvenile salmon from the water in front of Primary 3, 4 and 5 pupils in Chapelgreen Primary as part of the ‘Kids and the Kelvin’ project. The small, but very significant fish was found in a litter-strewn patch of the Queenzie Burn just 20 yards from the school gates.

During the ‘Meet Your River Day’ run by the Clyde River Foundation, pupils were shown electrofishing and kick-sampling techniques before taking their own samples from the river back to the classroom. With the help of Clyde River Foundation scientists, the pupils then identified invertebrate species to help determine the health of their local watercourse.

“The Clyde River Foundation has been surveying the Clyde and its tributaries for ten years and the River Kelvin is still in the process of recovering from its industrial past. It’s very significant that salmon have managed to find their way back up the Queenzie Burn,” said Clyde River Foundation Catchment Manager Dr Willie Yeomans. “That a salmon has chosen to travel all the way from the Atlantic Ocean back to a gravelly stretch of riverbed near Kilsyth is a testimony to the potential of our rivers to regenerate if given the chance. Alongside the 12 pupils and teacher from Chapelgreen, we are almost certainly the only folks alive to have seen a juvenile salmon in the Queenzie Burn.”

Head Teacher of Chapelgreen Primary, Mrs McNaughton added: “It’s been a wonderful hands-on experience. The children have really enjoyed playing a part in promoting the sustainability of their local river and became very attached to the trout fry that they raised in their classroom hatchery. Finding a salmon in the Queenzie Burn was a great surprise and a genuinely exciting and educational discovery for the pupils, proving that such projects in school DO have a very positive impact on the environment.”

Click here to read the short report in the Kilsyth Chronicle

Hi to everyone at Chapelgreen Primary!

It was great to see you all at the fish release. Here are some photos from the day…